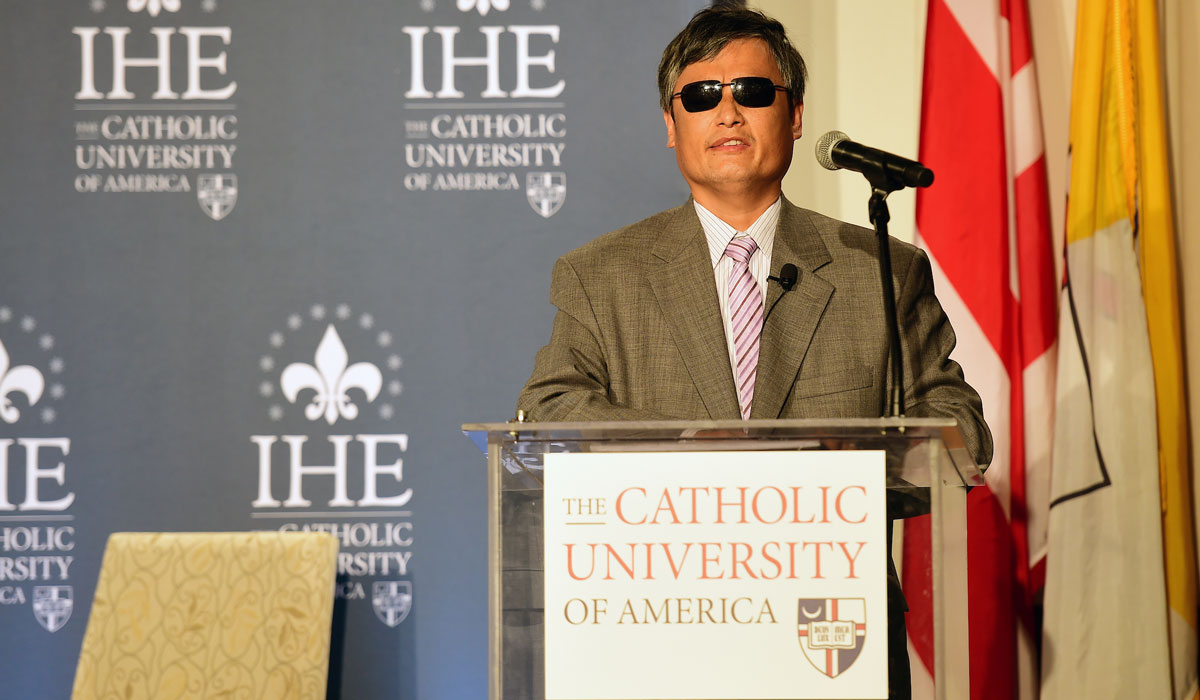 Chen Guangcheng, known to many as "the barefoot lawyer," was born in 1971 in a remote village in Shandong, China. The son of a poor farmer, Chen was left permanently blind by illness as an infant, and his family had few resources to support him. But despite his disability, he was determined to educate himself, eventually learning to read and write at age 18 when he began attending a school for the blind. He would be the first person in his family to earn a college degree.

At school, Chen was confronted with numerous instances of injustice occurring around him, and began speaking out. He took an interest in the law, but, being blind, was not permitted to study for a law degree. Over time, with the help of his close family, he taught himself law and began working on legal cases related to issues of civil rights and disability. His successful lawsuit against the Beijing Metro Corporation resulted in free ridership for the blind across China. The international media took notice, eventually dubbing him “the barefoot lawyer,” referencing the rural “barefoot doctors” of the Cultural Revolution. In 2005, Newsweek selected him for its cover.

Living at home in his village, his legal work eventually lead to his investigation into the violent campaign carried out by the authorities to enforce the so-called One Child Policy. He came under notice by the authorities, beginning a period of harassment and detention that would last over seven years, including repeated house arrests, black jails, and a four-year prison sentence. After nearly two years of brutal detention in his own home, he escaped his village, later seeking safety at the American embassy in Beijing. High-level diplomatic negotiations secured his travel to the US, where he became a student at NYU Law School in 2012.

Since beginning his advocacy work, Chen has been the recipient of numerous awards including Time Magazine 100 Most Influential List (2006), The Ramon Magsaysay Award (2007), The Lantos Human Rights Prize (2012), the UK Parliament’s Westminster Award (2013), the Geneva Summit for Human Rights and Democracy Courage Award (2014), and the Leopoldo Lopez Freedom and Democracy Award from Kenyon College (2021). He has established a not-for-profit foundation to further human rights in China, and serves as Distinguished Fellow at the Catholic University of America, Distinguished Senior Fellow in Human Rights at the Witherspoon Institute, and Senior Distinguished Advisor to the Lantos Foundation for Human Rights and Justice.

Mr. Chen’s memoir, The Barefoot Lawyer: A Blind Man’s Fight for Justice and Freedom in China, was released by Henry Holt Publishers in 2015.

William L. Saunders is a religious liberty and human rights scholar at The Catholic University of America. He is Law Fellow with the Institute for Human Ecology, Professor and Director of the Program in Human Rights in the School of Arts & Sciences and Co-director of the Center for Religious Liberty at the Columbus School of Law. He is Chair of the Religious Liberties Practice Group of the Federalist Society. Before joining The Catholic University of America, Mr. Saunders served as Senior Vice President and Senior Counsel with Americans United for Life for ten years. From 1999 to 2009, he was Senior Fellow in Bioethics and Human Rights Counsel at the Family Research Council.

Mr. Saunders attended the University of North Carolina at Chapel Hill on a Morehead scholarship. He obtained his degree in law from the Harvard Law School.

Mr. Saunders was featured in Harvard’s first Guide to Conservative Public Interest Law in 2003 and again in the 2008 edition. He served on Harvard’s Advisory Committee for its 2008 celebration of public interest law. A member of the Supreme Court bar, he has authored numerous legal briefs in state, federal, foreign, and international courts.

Mr. Saunders’ new book, Unborn Human Life and Fundamental Rights: Leading Constitutional Cases Under Scrutiny, will be published in 2019. His articles and book chapters have been published by the university presses of Harvard, Villanova, Brigham Young, Fordham, Georgetown, Houston, Scranton, and The Catholic University of America, as well as by the Intercollegiate Studies Institute, Freedom House, Greenhaven Press, Rowan & Littlefield, Praeger, St. Augustine’s, and Intervarsity press. He has given lectures and participated in debates at many colleges, universities, and law schools, including Princeton, Harvard, Georgetown, and Notre Dame. He delivered the annual J. Michael Miller Lecture at the University of St. Thomas (on international law) in February 2007, the annual R. Wayne Kraft Memorial Lecture (on bioethics) at DeSales University in February 2004 and the annual James Moore Lecture (on human rights violations in Sudan) at Millikin University in 1999. He has also lectured, and/or has been published, in many foreign countries, including Italy, Germany, Poland, Austria, Spain, Greece, Slovakia, Mexico, Qatar, Malaysia, Romania, the Philippines, Hong Kong, and the United Kingdom.

In addition to speaking and writing frequently on bioethics topics, Mr. Saunders has submitted testimony to the President’s Council on Bioethics, as well as to UNESCO’s Committee on Bioethics, and has briefed Congressional staff and state legislatures. He is a regular columnist for the National Catholic Bioethics Quarterly.

Mr. Saunders has appeared often in the media, including BBC World News, CNN, Fox News, EWTN, Vatican Radio, and National Public Radio. His articles on issues have appeared in a variety of journals, such as First Things, Human Events, Human Life Review, The Legal Times, Communio, The Family in America: A Journal of Public Policy, Ethics & Medics, and Touchstone.

Mr. Saunders served on the official United States delegation to the UN Special Session on Children in 2001/02. In 2011, he was a speaker at an official briefing at the UN, addressing the topic, why euthanasia is not a human right.

In 2004, he served on the NGO Working Committee in connection with the Doha Intergovernmental Conference for the Family.

Mr. Saunders is Senior Fellow with the Religious Freedom Institute, and Affiliated Scholar with the Pellegrino Center for Clinical Ethics at the Georgetown University School of Medicine. He is President of the Fellowship of Catholic Scholars and a member of the boards of the International Right to Life Federation, the Institute on Religion and Democracy, and the Society of Catholic Social Scientists.

In 1999, Mr. Saunders founded Sudan Relief and Rescue, Inc., to aid the persecuted church and to combat slavery and genocide in Sudan. He continues to work and write on the subjects of religious persecution, slavery, and genocide.

Sam Brownback formerly served as Ambassador-at-Large for International Religious Freedom and continues to work with coalitions around the globe to promote and protect the fundamental human right to religious liberty.

Brownback was the 46th Governor of Kansas. He was first elected in 2010 and re-elected in 2014. He left office after being confirmed to the position of Ambassador-at-Large in January 2018.

Prior to becoming governor, Brownback served in a number of elected government offices. After one term in the House of Representatives, he served as Senator for Kansas from 1996-2011, having first won a special election to fill the seat left vacant by Bob Dole (R). Brownback began his political career in 1986 when he became the youngest individual to be the Secretary of Agriculture in the state's history. During his tenure as Secretary, Brownback did double duty as a White House Fellow under the administration of George H.W. Bush.

Brownback is a licensed attorney, having graduated from the University of Kansas School of Law.

Jim Kelly is the Founder and President of Solidarity Center for Law and Justice, P.C., an Atlanta, Georgia-based public interest human rights law firm that promotes the right to education and freedom of religion and expression. He has authored and filed amicus curiae briefs in the Supreme Court of United States pertaining to educational freedom, religious freedom, and freedom of speech issues in the cases of Good News Club v. Milford Central School (2001), Zelman v. Simmons-Harris (2002), Locke v. Davey (2004), Espinoza v. Montana Department of Revenue (2019), and Carson v. Makin (pending).

Since 2005, Kelly has served on an of counsel basis as the Director of International Affairs for the Washington D.C.-based Federalist Society for Law and Public Policy Studies. He is responsible for European judicial and civil society outreach strategy and engagement and for monitoring developments in the areas of human rights, rule of law, democracy, anti-corruption, and national sovereignty.

In 2019, U.S. Secretary of State Mike Pompeo appointed Kelly to a four-year term as one of two U.S. members to the European Commission for Democracy through Law, which is known as the Venice Commission. The Venice Commission is the Council of Europe’s advisory body on constitutional matters, the role of which is to provide legal advice to its 62 member states and, in particular, to help states wishing to bring their legal and institutional structures into line with European standards and international experience in the fields of democracy, human rights, and the rule of law.

In 2020, U.S. Secretary of State Mike Pompeo appointed Kelly to serve a three-year term as one of six U.S. experts for the Human Dimension Mechanism appointed by Member States of the Organization of Security and Cooperation in Europe (“OSCE”) (known as the “Moscow Mechanism”), one of the tools used by OSCE to monitor implementation of commitments that participating States have undertaken in the field of human rights and democracy.

From 2005-2008, Kelly served as the Federalist Society’s representative on the U.S. National Commission for the United Nations Educational, Scientific and Cultural Organization (“UNESCO”) and as Chairman of the National Commission’s Social and Human Sciences Committee. From 2001-2008, he served as a private legal advisor to the U.S. Department of State and as an official U.S. delegate at five international human rights conferences, on the topics of education for democratic citizenship, migration, and bioethics.

Kelly is the founder of, and advisor to, Global Governance Watch, a web-based project started in 2008 that monitors global governance trends, international organizations, European institutions and national sovereignty, and business and human rights. From 2005-2011, he authored five articles published in the Federalist Society’s Engage law journal on the subjects of human rights education, human security, democratic evolution, human rights networks, the global governance of economic and social rights, and business and human rights.

In 2005, he published Christianity, Democracy and the American Ideal, a compilation of the writings of the French-Catholic philosopher Jacques Maritain.

Kelly is the founder and General Counsel of Georgia GOAL Scholarship Program, Inc., the state of Georgia’s largest ($44 million raised in 2021) K-12 tuition tax credit student scholarship organization awarding scholarships to thousands of children from low and middle-income families to attend the K-12 private schools of their parents’ choice.

He is the founder and General Counsel of Georgia HEART Hospital Program, LLC, a program that assists 56 rural hospitals in the state of Georgia market and administer a nationally-recognized rural hospital organization tax credit program ($60 million raised in 2021) designed to improve access to health care in underserved communities throughout Georgia.

From 1985 to 1995, Kelly engaged in an Atlanta, Georgia-based corporate, tax, mergers and acquisitions, and estate planning law practice, representing businesses and non-profits in a variety of corporate matters, including formation, governance, contract negotiation, disposition, and succession planning.

He is a former member of the Georgia Board of Juvenile Justice and the Georgia Judicial Nominating Commission.

He is married to Lisa Mathison Kelly. They reside in Alpharetta, Georgia and have two married children and two grandchildren.

Prof. Nieh has been an active advocate and speaker on religious freedom, human rights, and China affairs, and a dedicated leader in community events and services. His areas of research interests include Energy Systems, Combustion Engineering, Thermal Sciences, Multiphase Mechanics, and Environmental Engineering. He is a scholar and researcher, having authored/co-authored 100+ scientific research papers, 1 college textbook, 1 computer code, and 7 US/Foreign patents. He is the recipient of Lectureship Award of the United Nations, Charles Karman Teaching Excellence Award at School of Engineering/CUA, and Honorary Professorship of 6 universities in Taiwan and China. He initiated and served as the sole principal investigator of 20 government-/Industry-funded research projects with a total fund exceeding $3.5M. Being a tenured ordinary professor, he serves the fifth term (over 14 years) as the Chairman of Mechanical Engineering Department and various Committees of Academic Affairs in the university.